Prompted by Gannett's new pagination hubs, the industry-leading Society for News Design has cast serious doubts on what it fears could become an "assembly-line solution" for design and production at the nation's largest newspaper publisher.

"This plan,'' SND says in a letter published today, "is similar to others that have sought to template publications and centralize parts of the creative and production process, or, in some extreme cases, eliminate design and graphics departments." 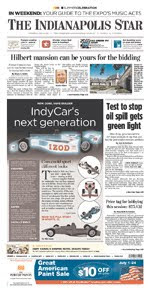 The letter was signed by the group's president, Kris Viesselman, who also is managing editor and creative director at The San Diego Union-Tribune, and by SND Executive Director Stephen Komives.

One passage animates an issue raised by some employees: that outsourcing design decisions across state lines, and often hundreds of miles away, risks undermining Gannett's local-local strategy.

"Without a firm understanding of the communities we serve," the letter says, "it seems inevitable that these publications will be compromised. If our information is not seen as authoritative and unique, we lose our diminishing competitive advantage in the crowded information marketplace, where many things are free."

The full text of the letter is on SND's website.

[Image: today's Indianapolis Star, Newseum. The Star is one of 21 newspapers assigned to a hub based 114 miles away, at The Courier-Journal in Louisville, Ky.]
at 9:45 PM