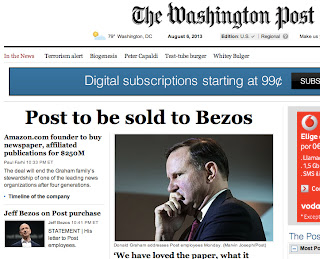 The Washington Post Co. has agreed to sell its flagship newspaper to Amazon founder and chief executive Jeff Bezos, ending the Graham family’s stewardship of one of America’s leading news organizations after four generations, the company said in a surprise announcement this afternoon.

The deal, coming on the heels of Saturday's fire sale of The Boston Globe to another wealthy individual, is the latest evidence the market for newspapers is heating up after years of plummeting revenue.

Bezos, 49, is paying $250 million in cash, and is investing on his own; Amazon is not a part of the acquisition. His purchase will likely renew interest in other newspapers -- including the spinoff or sale of Gannett's 100-plus U.S. and U.K. newspapers, plus USA Today.

Asked about that possibility two weeks ago, CEO Gracia Martore offered only a measured response, as she often does in such situations, in a conference call with Wall Street analysts. She didn't completely close the door on the idea, however. After referencing GCI's recent plans to buy TV company Belo, Martore said:

"We always, at the board level, are looking every time we meet and in between meetings, we are looking at opportunities to increase shareholder value. We never rule anything out, but our focus right now is a transaction that has created a lot of value for the company and will create even more into the future. So we're focused on that in the short term, to have a successful integration."

Still, Martore was similarly noncommittal when she was asked about the possibility of TV deals three months before. Unbeknownst to analysts, however, she was already just four days away from making an offer to Belo of $2.2 billion in cash and assumption of debt.

How deal came down
Early this year, Washington Post Co. CEO Donald Graham brought in investment bank Allen & Co. to begin looking for someone to buy the paper, The Wall Street Journal says in a report about today's deal.

He spoke with many prospects directly, drawing on his extensive network in Silicon Valley. Graham, who has been an adviser to Facebook CEO Mark Zuckerberg, has spent years building relationships with technology titans, including Bezos.

Graham personally reached out to Bezos early, according to a person with direct knowledge of the deal cited by the WSJ. "Initially, Bezos held back, citing a lack of time to properly deal with a transaction," according to the WSJ. Then, in July, Bezos wrote an e-mail to Graham saying, "If you're interested, I am."

Bezos, who launched Amazon in 1995, is worth about $26 billion via his stake in the e-commerce giant. As part of a planned stock sale, he took in $185 million this month, representing less than 1% of his holdings. Forbes ranked him as the 19th most-wealthy man in the world, just ahead of Google's Larry Page.

Email ThisBlogThis!Share to TwitterShare to FacebookShare to Pinterest
Tags: Board of directors, Deals, The Industry, USA Today