The all-cash deal announced early today with principal Red Sox owner John Henry would represent a stunning drop in the Globe's value. The New York Times Co. paid $1.1 billion for the daily 20 years ago, the highest price for an American newspaper. Adjusted for inflation, that would be even higher: $1.7 billion. 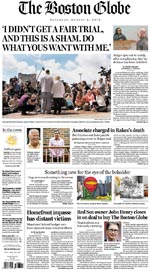 The NYT Co. has been selling assets to focus on its core holdings: The New York Times and The International Herald Tribune. The plan to sell the Globe, plus the affiliated Worcester Telegram & Gazette, returns the dailies to local ownership for the first time in two decades, the NYT reported early this morning.

Today's deal comes amid a wave of other newspaper sales nationwide, many at heavily discounted prices, as rich individual investors once more test the still financially unsettled media world.

The NYT Co.'s Globe acquisition in 1993 was part of the company’s strategy to solidify its grip on the eastern corridor advertising sector and to have a presence that stretched from Maine to the District of Columbia. At the time, in addition to its flagship New York newspaper, the company owned 31 regional newspapers, 20 magazines, five television stations, two radio stations and other businesses.

Henry, 63, made his fortune in investment funds and has built a sports empire that includes the Red Sox and New England Sports Network, as well as the Liverpool Soccer Club and Roush Fenway Racing, a NASCAR team, the Globe says in its own story about the deal.

He bested a field of more than a half dozen bidders, including members of the Taylor family who sold the Globe to the NYT Co. Other bidders included local business people and West Coast investors.

Email ThisBlogThis!Share to TwitterShare to FacebookShare to Pinterest
Tags: Deals, The Industry