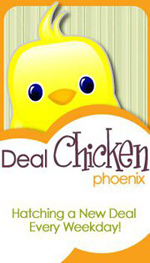 GCI is seeking at least six operations managers for a new social commerce service in Washington; McLean, Va.; Philadelphia; Detroit; Nashville, plus Phoenix. The job postings do not identify the service, but it sounds very much like the Deal Chicken coupon deal site, which launched in early September. Key among the responsibilities, according to the postings: "Ensure that the product’s users are continually delighted with the deals and service that they receive."

Like industry leaders Groupon and LivingSocial, GCI's Deal Chicken leverages group buying by young consumers savvy in social media such as Facebook and Twitter. Merchants offer a product or service at a huge discount -- say, 50%. (Information for merchants.) Deal Chicken handles promotion, fulfillment and payment collection in return for 50% of the revenue plus a 2.5% processing fee. Consumers only get the deal when a minimum number of buyers sign up. That encourages participants to use Facebook, Twitter, e-mail and other social media to get their friends on board.

The lure for merchants over traditional print and broadcast advertising: no upfront costs; they pay only when a guaranteed number of customers -- often first-timers -- commit to buy. GCI's risk: the company could cannibalize its existing advertising base in a bid to catch up to established competitors that already command jaw-dropping leads.

Since then, interest in Groupon surged when Google tried to buy the Chicago-based company for nearly $6 billion -- a price that valued the company well above GCI's $3.5 billion market capitalization. Groupon management rejected Google's overture in December in favor of taking the company public. That initial public offering could come in the third quarter.

Martore could update investors on any GCI deal-a-day progress Monday, when Corporate releases first-quarter earnings results. She has already warned investors of weakness in publishing revenue.

Deal Chicken's slow growth?
Groupon claims 36.8 million subscribers, in more than 160 cities since launching in November 2008. It has about 35,000 Twitter followers.

Its closest rival, Washington-based LivingSocial, is racing to catch up. It says it has more than 10 million subscribers in more than 170 markets. It has 43,000 Twitter followers. LivingSocial recently raised $400 million in additional investor funding, according to a Wall Street Journal story today.

Deal Chicken in Phoenix appears to be growing slowly, based on the limited public data available. Facebook users have "liked" the service's fan page only 3,500 times vs. 2,268 in September, when a marketing blog wrote about the site. On Twitter, it has just 630 followers. A week after its launch, Deal Chicken had 30,000 e-mail addresses, a figure Arizona Republic vice president of digital media Mike Coleman said was expected to double by year's end.

Coleman told Peter Krasilovsky of consultant BIA Kelsey's Local Media Watch blog that Deal Chicken, run from the Republic's base, chose to launch its own service rather than partner with established players such as Groupon.

"The company looked at its deal-a-day options," Krasilovsky wrote, "and thought it had plenty of internal resources and didn’t need to give away 5% to 10% of its earnings to a vendor. It also didn’t need to form a partnership with a major deal-a-day site. In the end, vendors and/or partners will inevitably squeeze tighter."

Krasilovsky continued: "As a standalone site, Deal Chicken can also establish its own pricing, which has been ambitiously set at 50% of the deal price, minus 2.5% for processing. That’s definitely at the high end of the deal-a-day range, which is typically 30% to 50%."

Gannett's job postings
[Updated at 7:50 p.m. ET. After I posted this, Bill Thornton, director of design and development, Twittered that Gannett is seeking UX designers and front-end developers to work on a social commerce project in McLean.]

"Gannett seeks an organized and business-savvy individual to manage the operations of its new social commerce product. Work in a fun start-up-like environment building a new product in a hot digital media space. The successful candidate will help oversee the product’s day-to-day functioning and work with product, sales and marketing teams to maintain both business success and an optimal experience for the site’s end users. Deep proficiency with digital media is a must."

Earlier: How a Bronx Zoo cobra is beating USA Today on Twitter
at 3:08 PM