USAT | Why Big Al is probably having a bad hair day 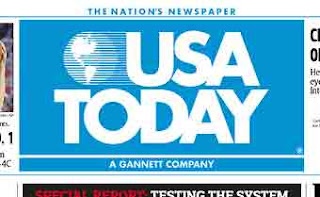 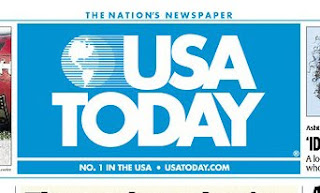 I don't know when USA Today first proclaimed itself "No. 1 in the USA" below its front page nameplate; oddly, the paper's own timeline of major events doesn't supply a date.

Ad Age says USAT was tops in circulation starting in September 1999, a reign that ended 10 years later, when The Wall Street Journal surged ahead on the strength of its many thousands of online subscribers.

Even so, Publisher Dave Hunke understandably didn't want to walk away empty handed that October 2009. In a statement, he observed that USAT was still the leader in print circulation: "We are proud to remain America’s number one choice in a daily print newspaper."

Indeed, on Page One, USAT continued to claim not one, but two, titles: "No. 1" and "The Nation's Newspaper.'' Neither referenced circulation or audience, Anonymous@2:06 p.m. observed: "As such, it's puffery and could be used until the end of time. Kind of like the statement, 'Dubow and Martore are the No. 1 leaders in the industry.'"

Whatever the distinction, it ended this morning: USAT finally dropped "No. 1" from its nameplate in favor of the Corporate-mandated "A Gannett Company." It's part of today's launch of Gannett's first corporate branding campaign.