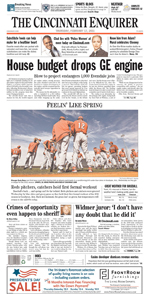 Gannett has now eliminated an estimated 145 jobs in recent weeks at 20 sites across the U.S. newspaper division, all part of an unannounced round of layoffs and other cost-cutting, according to Gannett Blog readers. About a third of those jobs were at four N.J. dailies. And as many as 12 were at The Cincinnati Enquirer.

We're tracking these reductions in this online spreadsheet. Please check whether your site is listed, then post updated figures in the comments section, below.

Note: We're counting jobs at all divisions -- not just among newspapers. In November, Gannett eliminated an estimated 255 jobs at 63 newspaper sites.

Earlier: Dozens of other recent layoff reports and comments in this post, and in this one.

Email ThisBlogThis!Share to TwitterShare to FacebookShare to Pinterest
Tags: Layoffs