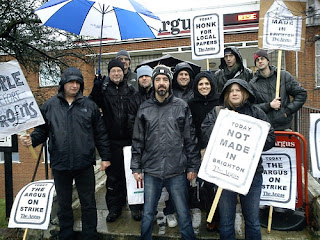 In at least their third round of such strikes, members of the UK's National Union of Journalists at Gannett's Argus in Brighton started a two-day protest this morning outside the paper's office. Along with NUJ members at the Northern Echo in Darlington, employees are protesting cost-cutting efforts by GCI's Newsquest division. Those efforts include meager pay raises after a multi-year freeze, and the elimination of jobs through consolidation of editing work at production hubs.