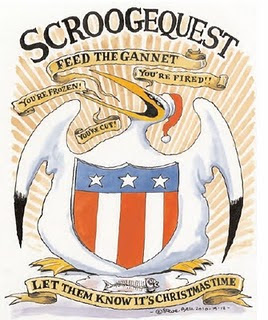 [Strike blog graphic shows displeasure with sending profits to U.S.]
National Union of Journalists members at Gannett newspapers in the company's U.K. Newsquest division have scheduled another round of two-day strikes, starting tomorrow. You can follow their progress on strike blogs for NUJ Darlington and Brighton Argus.

They don't mince words, either; from the Darlington blog: "We hold no confidence in David Coates, managing director of Newsquest North-East,'' they wrote Dec. 30. "Members note his cowardice in failing to be present when fundamental changes to the production of the flagship titles in Darlington were announced. We would ask that if he cannot be there during one of the most important moments in the modern history of the Darlington centre, why does he need to be there at all?"