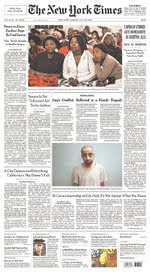 Blogger Henry Blodget, the former technology stock picker, offers a sobering analysis of chances that The New York Times will ever be able to support its newsroom on digital revenue alone. Answer: highly, highly unlikely.

"Overall," he writes today, "we think the odds are better than even that about half the folks in the NYT's newsroom and other print news will need to find another job (or career) within five years. We're certainly not rooting for that. But we do think it's the reality."

Note 1: The NYT is widely reported to spend $200 million a year to run its  approximately 1,100-person newsroom.

Note 2: Gannett's non-digital businesses -- mostly, 100 daily newspapers in the U.S., U.K., and Guam, plus 23 TV stations -- generated a combined $98 million in digital revenue during this year's second quarter, according to the just-released financial report.