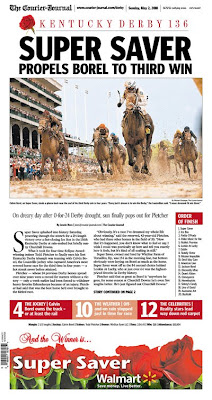 [Barely 43,000 copies of main news sections were printed]
On what is surely the biggest print run of the year -- the day after Louisville's Kentucky Derby -- The Courier-Journal's six-year-old press conked out amid electrical problems early this morning, preventing the paper from printing all but 43,000 copies. The disaster left 225,000 copies still to run.

Hundreds of thousands of residents and untold numbers of weekend visitors were denied copies of the paper, including a precious 20-page souvenir Derby section. The main A section, plus Metro, Sports and the special section won't be delivered until tomorrow -- assuming the paper gets the press running again today. The paper was only able to deliver pre-printed sections to area homes. I'm told that press technicians have been called in.

Excluding pre-prints, the scheduled run was to be 60 pages in four sections, with 58 four-color pages, one of my readers says.

The C-J estimates that 1.5 million people attend events the week leading up to the Derby; about 200,000 come from outside the metro area. That extra-large audience should have produced big advertising revenue throughout the print edition, and online. It's unclear whether delayed delivery will require make-overs for ads, or significant refunds.

S.O.S. sent to Indianapolis
In a note to readers bannered across its website, the C-J is blaming unspecified electrical problems. A free electronic replica of the newspaper was being made available at www.courier-journal.com/special.

As late as 4 a.m., my reader tells me, the paper was considering asking the C-J's sister paper, The Indianapolis Star, about 115 miles north, to "step up" and help complete the run. That option apparently was pursued.

Press is relatively new
The press is barely six years old; it went live in summer 2004. But I've been hearing about operational problems for some time, with one union member blaming cuts in the production department, leaving shifts understaffed.

"Maybe if they hadn't laid everyone off, this may not have happened,'' one of my readers told me via Facebook.

Has your site experienced a press or broadcast failure? Please post your replies in the comments section, below. To e-mail confidentially, write jimhopkins[at]gmail[dot-com]; see Tipsters Anonymous Policy in the rail, upper right.