Gannett board of directors said meeting this week; likely topics: bonuses, plus status of wage freeze 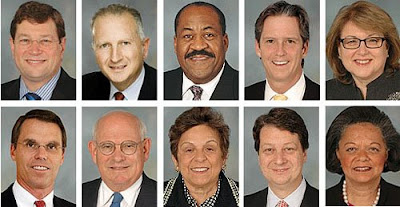 The board of directors gathers for a regularly scheduled two-day meeting beginning Tuesday, a reader tells me, and history suggests the agenda will cover annual pay for Chairman and CEO Craig Dubow and other top executives. Directors could also be briefed on the future of the year-long newspaper division wage freeze due to end April 1; the outlook for any more unpaid furloughs, and a reported new Gannett branding campaign. Also on tap, I'm told: an exclusive dinner party for directors and as many as 100 select employees.

Last year's meeting culminated in a flurry of regulatory filings that offered hints at the size of executive paychecks, a big chunk of which come in the form of stock options. Back then, the documents filed with the U.S. Securities and Exchange Commission revealed that 2008 bonuses had been cut in half for Dubow and then-Chief Financial Officer Gracia Martore (left) following the company's dreadful performance that year. Those 2008 stock options have since become quite valuable.

As soon as later this week, we should see a similar raft of SEC documents revealing stock given as part of 2009 bonuses. Don't be surprised if those bonuses have spiked way up, given the surge in Gannett's stock during the year. Complete details on those 2009 stock awards, plus salaries and other benefits, will be disclosed in the annual proxy report to shareholders, due the middle of next month.

Wage freeze future uncertain
The year-long wage freeze was imposed on the approximately 29,000 employees in the U.S. newspaper division starting April 1 last year. My reader source worries the freeze will continue, rather than get lifted. (The reader, a good source in the past, goes so far as to say in an e-mail: "It is most likely going to be extended." I have not heard that from any other sources, however, so caveat emptor.)

Lending credence to that notion: a recent move by USA Today, which extended its own wage freeze 90 days past its scheduled end date of Jan. 31. In a memo to employees earlier this month, Publisher Dave Hunke cited the economy's "inconsistent and unsure'' recovery. A bit ominously, he said the extension was for a "minimum'' of 90 days.

To be sure, USA Today faces unique market pressures: It's almost exclusively dependent on national advertising, while Gannett's community papers get their ad sales from local retailers and other businesses. Still, Hunke's warning on the economy could reflect broader worries on the powerful Gannett Management Committee led by Dubow.

For her part, Martore -- recently promoted to President and Chief Operating Officer -- has on two occasions failed to rule out another round of unpaid furloughs later this year. Most of the company is on one-week furloughs during the current quarter. Last year, there were furloughs in both the first and second quarters.

A less dramatic meeting?
Tuesday or Wednesday, the board should approve the quarterly dividend; watch for an announcement on that. Plus, directors could preview the annual report to the SEC, called a 10-K; that information-rich document could also be filed as soon as this week. Last year's 10-K, for example, revealed a steep decline in the company's overall employment.

Also, directors may learn details about what I'm told is a major, new advertising campaign in the works meant to burnish Gannett's brand name. (I plan to write more about that later this week.)

For sure, there will be other items on the board's agenda, although it's unlikely they'll be as monumental as a year ago. Back then, as Gannett tumbled near bankruptcy, directors agreed to slash the annual dividend by 90%, to just 16 cents a year. That freed up $325 million annually to pay down the company's crushing debt, a big portion of it due to a disastrous $1.8 billion stock buyback led by Dubow and Martore.

A hint: You'll know the board is meeting at Gannett headquarters in McLean, Va., if you see a complement of black SUVs and other fancy cars parked in front of the Crystal Towers, with chauffeurs waiting to ferry many of the 10 members to and from their hotels.

Earlier: One of the longest-serving directors, Donna Shalala, is facing her last year on the board, according to bylaws. Plus: As board finalizes top executive bonuses, will committee repeat last year's surprise decision?

What do you want the board of directors to know about how you've coped with the wage freeze and unpaid furloughs? Please post your replies in the comments section, below. To e-mail confidentially, write jimhopkins[at]gmail[dot-com]; see Tipsters Anonymous Policy in the rail, upper right.