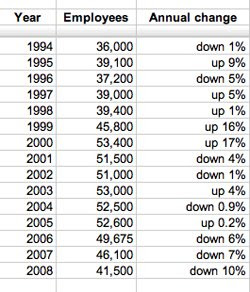 In fact, total employment would have fallen much more, but for Gannett's purchase last September of majority control of jobs site CareerBuilder. For the first time, GCI counted all 2,000 CareerBuilder workers in its global 41,500 headcount. Take them out, and Gannett's total workforce actually fell more than 14% from 2007, on an apples-to-apples basis.

Also new in today's 10-K: an employment breakout for the digital portfolio companies, which include CareerBuilder: about 2,500 at the end of last year; GCI did not provide a comparable figure a year ago.

These companies include the jobs site and ShopLocal "from the dates of their full consolidation," plus PointRoll, Planet Discover, Schedule Star and Ripple6. So, back out CareerBuilder, and the digital portfolio companies employ about 500 total.

Newsquest paces losses
Companywide, employment peaked at 53,400 in 2000, following the $2.6 billion all-cash acquisition of Central Newspapers, which included The Arizona Republic and The Indianapolis Star.

The U.S. Community Publishing newspaper division now accounts for 70% of all employees, down marginally from 71% in 2007, the 10-K shows. Among operating units, U.K. newspaper division Newsquest reported the biggest employment reduction, nearly 19%.

Please post your replies in the comments section, below. To e-mail confidentially, write gannettblog[at]gmail[dot-com]; see Tipsters Anonymous Policy in the green sidebar, upper right.
at 10:46 AM