Here's the Executive Summary of what anonymous readers and senders of e-mail to yours truly have been whispering about in comments here and here over the past week. (Who knows? Maybe some of what follows is even true!)

The Gannett-controlled publisher of the Detroit Free Press and The Detroit News is working on something super-duper-secret called "Project Griffon." It would represent an enormous gamble by Gannett and its partner, MediaNews Group, to stanch multimillion-dollar losses in a city whose economy is cratering around the auto industry crisis. Hanging in the balance are the jobs of perhaps 2,000 employees.

Yet with nothing to lose but, well, more losses, the idea is to blow up the traditional newspaper business model in an especially dramatic way. A formal announcement could come as soon as Tuesday -- if you believe the speculation.

The concept explained
Under the purported plan, one or both Detroit papers would end home delivery entirely, except for perhaps two or three days a week -- the more-lucrative Thursday, Friday and Sunday editions. Other days, there would be some sort of slimmed-down single-copy-only version. And everyone would be encouraged to subscribe to already-available electronic editions of the Freep and the News.

Stoking speculation: this widely circulating link to a special Freep subscription offer. When prompted for the two-digit access code, type MP and you get one offer; type PM, and you get the offer purportedly available under Project Griffon. 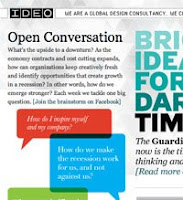 An adviser on all this, we are to believe, is a Silicon Valley consulting firm, IDEO, with a wild-and-crazy website (detail, left) to match its California-groovy About:

Based in Palo Alto, Calif., IDEO is "an innovation and design firm that uses a human-centered, design-based approach to help organizations in the business, government, education, health care, and social sectors innovate and grow in three ways" -- and it just keeps going on and on like that!

Is any of this true?
There are many things I don't understand about this -- like, whether any of it's even true. That said, Detroit Free Press editor Paul Anger wasn't very reassuring yesterday in this Metro Times column (second item) about Detroit's future. Or maybe Anger was just choosing words extra carefully when he said: "I think it's pretty safe to say we're going to print a newspaper."

Now, I can imagine lots of savings on newsprint, presstime and labor (depending on union contracts) for production, and delivery. But how would this affect ad sales, and the size of the ad sales staff? And what other savings would there be?

General Motors vs. Gannett
I've always thought San Francisco would be the first major American city to lose some or all of its traditional printed newspaper to the Internet; the Hearst-owned San Francisco Chronicle has been on the ropes for years.

But that was before General Motors' stock lost 84% of its value -- in one year. Gannett shares, down 76%, aren't far behind.

(Confidential to FG: How'm I doing so far?)