In fresh speculation about the money-losing Detroit operations, alternative weekly Metro Times today says Gannett has made a "momentous decision" to deliver the Detroit Free Press only two or three days a week, soon after the first of the year. 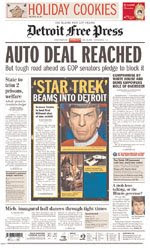 But the weekly cites only two sources in its story: a "longtime staffer who seemed to be in a position to know," plus top editor Paul Anger's reportedly vague replies to Metro Times' questions.

The unidentified employee is quoted saying: "They would print it and put it in the boxes the other days, but otherwise encourage people to go to the Internet." The Freep would be home-delivered Thursday and Sunday, and perhaps one other day, Metro Times says; subscribers would be encouraged to turn to the paper's website.

Columnist Jack Lessenberry says he was "unable to nail this down further, but it sounded more definite than many of the constant rumors swirling about the fate of one or both Detroit dailies."

Metro Times reporter Sandra Svoboda contacted Anger, "who offered what can best be described as a 'guarded' response," Lessenberry says. Anger is quoted saying: "We're looking at all sorts of things. I think it's pretty safe to say we're going to print a newspaper."

Asked whether the print version would be scaled back, Anger is quoted saying: "I can't really say anything else. We are no different than anybody else in the country, and all of us better be looking at everything. . . . This is all a work in progress."

Email ThisBlogThis!Share to TwitterShare to FacebookShare to Pinterest
Tags: Detroit