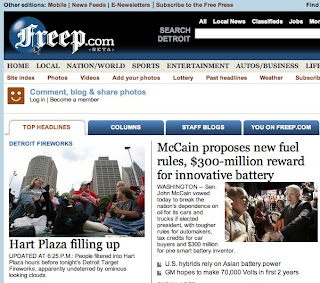 In one of Gannett's biggest buyout offers, the corporate parent of the Detroit Free Press and The Detroit News today called for 150 employees to voluntarily give up their jobs by July 18 -- with layoffs threatened if that target isn't met. In a starkly worded memo, CEO and Publisher Dave Hunke told employees: "The environment in which newspapers operate continues to worsen rapidly.'' (Full text, below.)

Hunke said buyouts were being offered to active, benefit-eligible, non-union employees who are 45 and up with at least 10 years' service as of July 31, 2008. The same offer was extended to eligible employees at the Detroit Media Partnership; in addition to the Freep, it publishes the rival News, plus handles accounting and other business functions for the papers under a joint operating agreement.

The 150 target is about 14% of the 1,044 eligible employees, a Gannett Blog reader tells me. Overall, the Freep, News and the agency employ somewhere in the neighborhood of 2,000. (But I could be way off on that.)

As someone who got a buyout in January, I can say this: It's a whole lot better to agree to be laid off than to be forced to leave. Plus, the terms are usually better. But if you plan to blog about the company after you leave, read anything you're asked to sign, and look for an anti-disparagement clause.

Gannett owns the Freep. It sold the News three years ago to MediaNews Group as part of a complicated deal that included Knight Ridder papers.

Have there been buyouts, layoffs or other job cuts at your newspaper, TV station or other Gannett business? Post a note in the comments section, below. To e-mail confidentially, use this link from a non-work computer; see Tipsters Anonymous Policy in the green sidebar, upper right.

Full text of Hunke's memo
The environment in which newspapers operate continues to worsen rapidly, and the Detroit Media Partnership faces unique challenges because of the state’s business and economic climate. We must take several actions immediately.

First, we are offering a voluntary severance program. The eligibility pool is expanded beyond what was offered in October.

In early August we will cease publication of Twist and the Community Free Press sections. We are evaluating ways to retain some key content and to retain advertisers.

Some details on the voluntary severance program:

It is being offered to active, benefit-eligible, non-represented employees of the Partnership and Detroit Free Press who are 45 years of age or older with at least 10 years of credited service as of July 31, 2008.

We have contacted union leaders to extend this offer to all bargaining unit employees. This offer is subject to negotiation with the unions and we will complete that process as soon as possible.

The company reserves the right to limit the number of volunteers accepted in order to maintain business operations.

• The offer is open until July 18.
• We are looking for 150 volunteers overall.
• If more than 150 volunteer, we will review whether we can expand the pool. Decisions about which volunteers will be accepted will be based on position and seniority.

If the voluntary offer doesn’t result in a sufficient number of volunteers, or if in the future, economic conditions worsen, it may be necessary to consider layoffs.

Employees who decide to volunteer should submit a request in writing (signed and dated) to Jill Smith in H.R. The company will review the list of volunteers after July 18, make a determination and inform all volunteers who have been accepted. Separation dates will be set at that time.

All external inquiries from media regarding this voluntary severance should be directed to Susie Ellwood, Executive VP/General Manager.