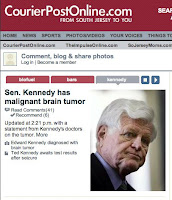 Updated at 8:03 p.m. PT: A reader says in a new note in the comments section, below: "I know of at least one Features reporter who was denied the buyout. This was a classic clusterfuck, Courier-Post style. How about approaching the most senior members of the staff, one at a time, until you get the desired number of acceptees?''

Earlier: Regarding big job cuts now underway at five New Jersey newspapers, a Gannett Blog reader says they're "disgusted" by what happened at their paper, the Courier-Post in Cherry Hill. "The initial offer, understandably, divided the newsroom into two tiers -- the writers who were offered a buyout and the editors who were not,'' the reader told me in an e-mail. "Much anger from veteran editors who complained they were not included. After achieving that demoralizing outcome, the C-P and Gannett have put a wedge between the people who were offered a buyout and the ones who received it."

Join the lively debate on how many N.J. staff sought buyouts.

[Image: screenshot of the C-P's home page, now reporting: "A cancerous brain tumor caused the seizure Sen. Edward M. Kennedy suffered over the weekend, doctors said today in a grim diagnosis for one of American politics' most enduring figures. Kennedy is 76]
at 11:03 PM