Hot Off the Press: The Indianapolis Star 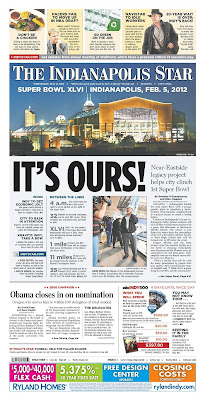 This morning's Star, reporting that Indianapolis yesterday was named host of the 2012 Super Bowl game. The city beat rivals Houston and Phoenix by promising to build a practice facility in a poor, downtown neighborhood that will stay in place for residents to use after the much-hyped game.

Professional sports is a huge and profitable industry, worthy of serious reporting that it seldom gets. Too often, it veers wildly into hyperbole, as when Indianapolis Colts owner Jim Irsay told the Star: “A lot of times, people think it’s just about big numbers and big money, but it’s also about big hearts, too.”

Back to the money. Here's the proverbial and frequently unchallenged economic impact graph (I've written more than my share): Mayor Greg Ballard said he expected the city to pay $1 million to $2 million for public safety support, "but estimated the game would generate an economic impact of at least $100 million and up to $20 million in tax revenue."