Pierre Omidyar has suddenly emerged as the latest technology titan bankrolling 21st century journalism, a move that could add to the challenges struggling USA Today already faces in its ongoing turnaround.

An investment that size would be one of the largest for a digital news start-up. The closest parallel I can think of is Rupert Murdoch's The Daily, an iPad-only national publication that lost a reported $30 million annually during the two years it published before Murdoch shut it down last December.

Omidyar, 46, and retired from eBay, was offered a chance to buy The Washington Post, a deal that ultimately went to another techie in August: Amazon founder Jeff Bezos. That experience, plus his longstanding focus on social entrepreneurship, led Omidyar to Greenwald, who was already planning to set up an independent media outlet.

Omidyar's principal journalism interest is the kind of investigative watchdog journalism Greenwald does. He was among the first to report information provided by one-time U.S. National Security Agency contractor Edward Snowden.

But, blogger Jay Rosen writes this morning, "Omidyar believes that if independent, ferocious, investigative journalism isn’t brought to the attention of general audiences, it can never have the effect that actually creates a check on power."

A mass-media site
So, Rosen says, Omidyar's new venture "will have to serve the interest of all kinds of news consumers. It cannot be a niche product. It will have to cover sports, business, entertainment, technology: everything that users demand."

For his part, Omidyar wrote today that it will be "a new mass media organization. I don’t yet know how or when it will be rolled out, or what it will look like. What I can tell you is that the endeavor will be independent of my other organizations, and that it will cover general interest news, with a core mission around supporting and empowering independent journalists across many sectors and beats."

Greenwald says the venture will have branch offices in New York, Washington and San Francisco. Its name has been chosen, but not yet made public, according to Rosen. 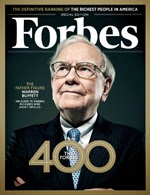 Omidyar and Bezos are entering the business as USAT attempts a turnaround under another technology entrepreneur: Publisher Larry Kramer. Before coming to the daily in May 2012, Kramer had founded the financial news site MarketWatch.

News Corp. chairman Murdoch isn't the only Old Economy billionaire investing in journalism. Consider another Forbes 400 member: No. 2 Warren Buffett of Berkshire Hathaway. Worth $58.5 billion, Buffett snapped up dozens of print newspapers in recent years, even as he dumped all his Gannett stock.