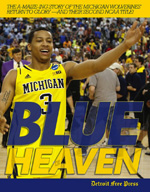 "Michigan players weren’t going to profit from their Final Four run," the blog said yesterday. "But the Detroit Free Press definitely intended to do so. Amazon and the book’s publishers made the paper’s 'A-Maize-ing' book commemorating Michigan’s “SECOND NCAA TITLE!” available for pre-sale, at a discounted price, despite Louisville winning the title."

In a statement, the Freep said the pre-order notice at Amazon had appeared by mistake; it's since been taken down.

Deadline Detroit says Big Lead raised a legitimate issue: "While the Free Press could have profited from a potential Michigan national championship, and countless others are currently profiting from Louisville's title, the players on the court Monday night cannot." 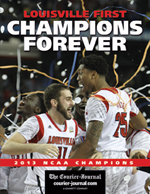 Meanwhile, The Courier-Journal in Louisville has published the 128-page Louisville First, Champions Forever in softcover ($14.95) and hard ($24.95).

Chasing a bigger market
Gannett is placing a big bet on USAT's Sports Media Group, a giant "vertical" that's rolling up all of the company's newspaper and TV sports content into a national network meant to compete with ESPN, Yahoo Sports, Sports Illustrated and other media outlets. Corporate has set an ambitious goal for the group: adding $300 million in new revenue to the top line by 2015.

But GCI has run into trouble over commercializing sports at the high school level, most notably in Wisconsin in September over use of a player's image in billboards and a bus advertisement, and in August 2011 over livestreaming videotaping games.

Related: The Shame of of College Sports, Taylor Branch's memorable Atlantic magazine account of how student-athletes generate billions of dollars for universities and private companies, while earning nothing for themselves.
at 9:52 AM