Big Al | In death, a businessman to the very end 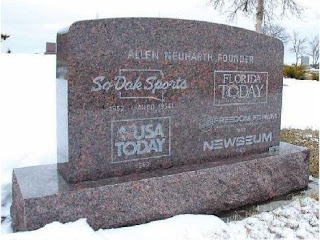 [Neuharth's gravestone, which he erected prior to his death]

Former Gannett Chairman and CEO Al Neuharth, who died April 19 at age 89, will be buried in a public ceremony in his hometown on May 18 at South Dakota's Eureka Cemetery, alongside his parents, brother and sister-in-law.

His gravestone, which he bought and had placed alongside his family's graves, lists as his accomplishments the businesses he founded: USA Today, the Freedom Forum foundation, Florida Today in Brevard and the Newseum in Washington, according to the Aberdeen American News. He poked fun at himself by also engraving "SoDak Sports 1952 (failed 1954)," for his first media venture.

Neuharth was born in Eureka March 24, 1924, the youngest of two brothers.

Arrangements were made with Lien-Straub Funeral Chapel of Eureka.