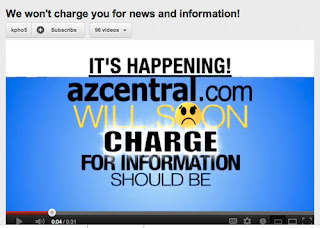 The KPHO CBS affiliate is taking aim at paywall plans by Gannett's Phoenix media operations -- The Arizona Republic and KPNX-TV -- in an advertisement saying news and information should be free. The ad, which you can watch on YouTube, uses an American flag and other patriotic imagery to illustrate its claim.

The ad also notes that the station won't ask for viewers' credit card number, a clear attempt to stir up online security worries among potential subscribers to the GCI website.

KPHO is owned by Meredith Corp. Its ad arrives as GCI rolls out paywalls nationwide amid concerns that rival outlets will try to pick off readers and viewers who don't want to pay for online access.

The Republic and KPNX, which operate a combined newsroom at azcentral.com, plan their paywall launch in September. They will become GCI's largest news media outlet to require that readers and viewers pay for online access.

Earlier: Republic readers turn table on editor Lovely.
at 7:59 AM