The Daily Advertiser in Lafayette, La., is standing by its decision to run an advertisement yesterday by a far-right extremist group suggesting President Obama and Democrats are conspiring to murder Catholics and Christians, according to the left-leaning Think Progress blog.

The paper's publisher since March, Karen Lincoln, said she stood by the decision. "We look at all of the ads, and the decision is made by each market,” she said. “This ad did meet our standards.”

Lincoln said another ad from the same organization, Save Our Republic, was scheduled to run in tomorrow’s paper.

Here's a photo of the advertisement; go to the original Think Progress post for a bigger view: 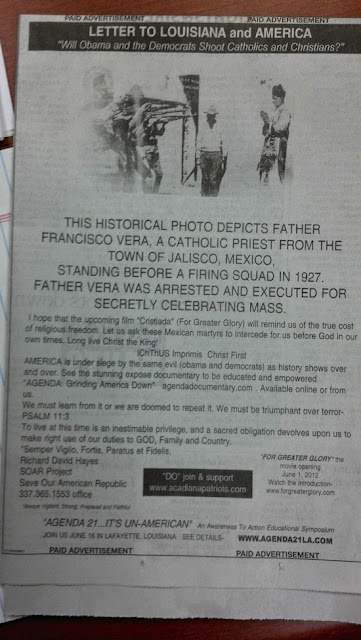