Urgent: In second wave of 2010 executive bonuses, board hands out 1M-plus shares of Gannett options 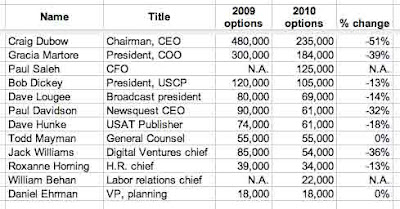 Gannett just disclosed that the board of directors gave more than one million options on the company's stock to a dozen senior executives this week -- a trove potentially worth millions of dollars, at a time when the company has been slashing thousands of jobs and reducing wages through mandatory furloughs.

The options are part of the executives' annual pay last year. They give executives the right to buy shares at a pre-set price over several years, no matter how much more the stock is worth on the open market. For many companies, options are a significant part of annual pay.

Corporate disclosed details of these options in a series of documents filed late this afternoon with the U.S. Securities and Exchange Commission. The documents show that most of the executives received fewer options than they did a year ago. The options' ultimate value will depend on the direction of GCI's stock, however.

The options carry a so-called strike price of $16.23 a share. They vest, or become the executive's property, in four equal annual installments starting Feb. 23, 2012.

Of the 12 executives, two are relative newcomers: Chief Financial Officer Paul Saleh and labor relations chief William Behan; both were appointed last year. Saleh, for one, got 125,000 options this week.

These are the second set of stock awards given to executives as part of their 2010 pay. In mid-December, the board gave Dubow and other top managers hundreds of thousands of shares of restricted stock, known as RSUs.

The executives' total pay for 2010, including any cash bonuses, will be disclosed next month, when Corporate files the annual shareholders' proxy report. (What five highest-paid executives got paid in 2009.)

Earlier: A year ago, option awards show big increases for Martore, but not Dubow
at 7:08 PM