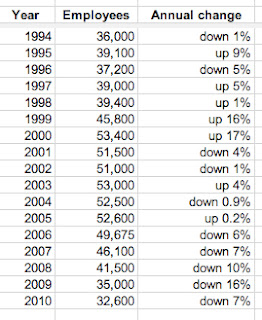 Gannett's worldwide employment fell again in 2010, but at a slower rate than in the two previous years, according to a new filing the company made today with government regulators. Indeed, two of GCI's major divisions showed an increase in workers from 2009.

The company had 32,600 employees as of Dec. 31, down 7% from 35,000 at the end of 2009, according to the annual 10-K filing with the U.S. Securities and Exchange Commission. (See table, above.) That decline was considerably less than the 16% plunge in 2008-2009, and reflected the company's more stable financial position as the world's economy emerged from a deep recession.

U.S. Community Publishing -- the company's biggest division, with 81 small and midsize newspapers -- once more shed the most workers: 2,300, or about 9%. The U.K. newspaper subsidiary, Newsquest, eliminated nearly 6% of its jobs. The two divisions gaining jobs were employment site CareerBuilder and the broadcasting division, which includes 23 U.S. TV stations.

Although the company owns barely 51% of CareerBuilder, it counts all 1,700 employees as though they worked entirely for GCI. (Tribune, McClatchy and Microsoft own the rest of CareerBuilder.) GCI bought control in 2008. So, the employment figures in the table, above, prior to 2008 don't reflect CareerBuilder's workforce.

Today's SEC filing shows that under Craig Dubow, who became CEO in 2005, the company has now eliminated 20,000 jobs -- more than one in every three.

Next month, GCI will disclose Dubow's 2010 pay in the annual proxy report to shareholders. In 2009, he got $4.7 million, which included a $1.45 million cash bonus, based in part on his success in saving money through layoffs and furloughs.

Following is a breakdown of employment by major division:

One year from now, will you still be a Gannett employee? Please post your replies in the comments section, below. To e-mail confidentially, write jimhopkins[at]gmail[dot-com]; see Tipsters Anonymous Policy in the rail, upper right.
at 8:48 PM