Reports: Three N.J. newsrooms to be consolidated; Asbury to take news lead, as 99 jobs get cut by half 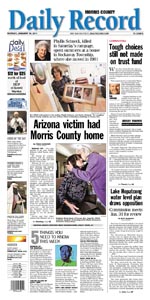 The three papers are the Courier News, Daily Record and Home News Tribune, according to reader e-mail, and Gannett Blogger comments. Under the reorganization announced about an hour ago, the Asbury Park Press will produce the bulk of local news stories, while the remaining staffers will focus on producing "topics" content, says Anonymous@3:05 p.m.

The 99 current staffers must apply for 53 remaining positions, my tipsters say. "NO SEVERANCE," says 3:05 p.m. "Just some 'transitional pay program.' Everyone's gone by Feb. 4; not even a month's notice."

In an e-mail, a reader told me: "Nothing in writing; they are talking on a conference call now. . . . Content being changed: We will keep putting out a daily newspaper, but they are completely changing what we do."

Among six N.J. dailies
As a whole, Gannett's six-paper New Jersey Group has struggled financially for years. This afternoon's news follows speculation here that a major reorganization was in the works. And it explains why the three affected dailies escaped layoffs during a November round that cost an estimated 253 jobs at 63 other GCI papers.

Asbury, meanwhile, has emerged as an editorial production center. It is one of five hubs for the Design Studios, which will design and build pages for groups of newspapers. The other hubs, being rolled out over two years, are in Des Moines; Louisville, Ky.; Nashville, and Phoenix.

The drive time between Asbury Park's main office at Neptune (mapped) and the three dailies ranges from 40 to 75 minutes, according to Google Maps.