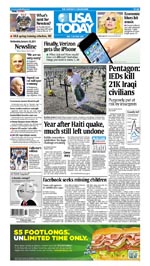 Vertical managers are supposed to sell to clients, develop new strategy, as well as oversee editorial content, new partnerships and products, etc. Their role calls for them to blur the line between marketing and journalistic content at a senior level.

Presumably, more vertical managers will be appointed with each "content ring" converted into a "vertical."

The chain of command now appears to be that the content ring leaders (remember those 11 or so coveted slots snatched up by oldtimer print deputy managing editors last August?) will report to the new, marketing-focused vertical managers.

The vertical managers, in turn, report to Senior Vice President Heather Frank, another AOL alum. USAT 2011 is starting to look like AOL 2003. This management team is charged with figuring out how to translate USAT's 20 million or so monthly unique visitors into meaningful ad revenue, something USAT has failed to do in six years of trying.

These are the top-down commanders carrying out Publisher Dave Hunke's big bet that USAT can move first and fastest to dominate mobile ads.

All of today's sacrifice is to win at Web Apps, which in terms of ad revenue doesn't even qualify as a fledgling market.

Email ThisBlogThis!Share to TwitterShare to FacebookShare to Pinterest
Tags: Letters to the Editor, USA Today