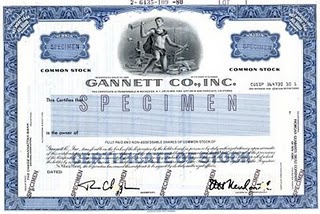 [A Gannett stock certificate. GCI closed today at $15.04]
Regarding the disposition of money saved during the current round of furloughs, Anonymous@1:55 p.m. writes today about Gannett's history as a publicly traded company. (Note: GCI was founded in 1906. It went public in 1967, when its second CEO, Paul Miller, was in charge. GCI's more than 237 million outstanding shares of common stock are held by about 8,800 shareholders in all 50 states and several foreign countries.) Here's 1:55's comment:

The root of all evil, so to speak, came years ago when we agreed to be a publicly held company. When we did this, the stockholders, and returning maximum value to stockholders, became our No. 1 focus.

When times were good and margins large, we could serve the shareholders and still do good journalism, public service, rich content and the like. As margins dropped, and with our No. 1 focus (and, truly, our duty) being to maintain and grew shareholder value to the best of our ability, we had to cut the quality.

I have sat around the table with a group president and heard this executive say, to paraphrase, "Stop talking about readers and audience and quality. I really don't care about that. Start talking about how we can move our numbers." Now, it was said with a smile and intended to be sarcastic. But, sadly, in this setting, it was more truth than humor. Content is often seen as an expense, rather than the element of what we do that makes us special. Of course, if we can manage to do good content with reduced resources, we will give lip-service to its value and worth. But little more.

Our chairman/CEO, our president, our division president and, most important, our board of directors are first and foremost charged and required to do everything in their power to maximize shareholder value. Everything else is secondary. So, while a private company might be willing to say, "Let's settle with an XX-percent margin because I know first-hand the good we are doing for our communities," our corporate, publicly held structure renders such notions as quaint, nostalgic and, frankly, irresponsible to our shareholders who want a return from their investment right now, not a few years down the road.

More profit, or at least the most profit we can get, is expected, required and rewarded.
Please post your replies in the comments section, below. To e-mail confidentially, write jimhopkins[at]gmail[dot-com]; see Tipsters Anonymous Policy in the rail, upper right.
at 4:07 PM

Email ThisBlogThis!Share to TwitterShare to FacebookShare to Pinterest
Tags: Board of directors, By the numbers, Executive Suite, Furloughs, Letters to the Editor, Stock