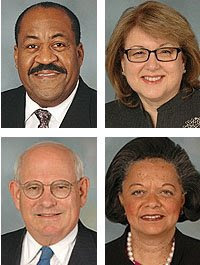 The board of directors will likely pay top executives millions of dollars more in bonuses this year, in part for making employees take unpaid furloughs during the current quarter, company documents show.

Last year, for example, the board specifically cited furlough savings as a reason to award $3.5 million $4 million in cash bonuses to the company's five highest-paid executives with their 2009 pay.

Community newspaper division President Bob Dickey, for one, got a $410,000 bonus as part of his $1.9 million in overall 2009 compensation. It was Dickey who yesterday announced the latest round of furloughs for most of GCI's approximately 25,000 workers at 81 U.S. dailies. They exclude two papers that aren't in the community division: USA Today and the Detroit Free Press.

Fourth furlough round
Bonuses and other details about executive pay for 2010 are expected to be announced in mid-March.

These are the fourth mandatory unpaid leaves the company has announced over the past two years. The current round, which ends March 27, also is the third consecutive first quarter in which GCI has required furloughs, a worrisome sign that the company is now locked in a cycle of early year cost cutting amid continued declines in revenue.

A history
2009. GCI launched a one-week, unpaid furlough across all U.S. divisions during the first quarter. Another furlough followed in the second quarter; that one, also for most U.S. divisions, called for one unpaid week for most employees, and a second week for other, more highly paid workers.

2010. The U.S. newspaper division, Corporate and some other divisions were furloughed for one week, during the first quarter.
at 9:05 AM