Gannett has just disclosed an important part of this year's annual pay to 13 of the company's top executives: so-called restricted stock units.

RSUs are promises of company stock that can be claimed at a future date. They are significantly different from stock options, where executives buy shares from the company at a discounted price. RSUs are outright awards that don't require the executive to pony up any money.

RSUs and options have the same purpose: to encourage executives to stay in their jobs, while working to boost the company's stock price.

Today, for example, the company said the board of directors had awarded CEO Craig Dubow 110,000 RSUs, according to this Form 4 filing with the U.S. Securities and Exchange Commission. They may be redeemed for actual company shares on Dec. 10, 2014. If GCI's shares are worth the same on that date as they are at today's closing price -- $15.43 -- Dubow's 110,000 RSUs would be worth nearly $1.7 million. If GCI is worth more, so, too, are his RSUs. (And ditto if GCI's value sinks.)

RSUs are just one of several components of annual pay for senior executives. In addition to cash, they get stock options. I expect the company will disclose the options grants fairly soon.

Last year, Dubow got paid a total $4.7 million. Of that, an estimated $1.3 million was in RSUs, and $585,000 was in conventional stock options. (Pay last year for Dubow and other highest-paid executives.)

The chart, below, lists the RSUs granted to executives, based on today's filings. You may also download a copy of the chart. The board of directors granted all the RSUs last Friday. They all may be redeemed on the same December 2014 date. (List of all SEC filings.) 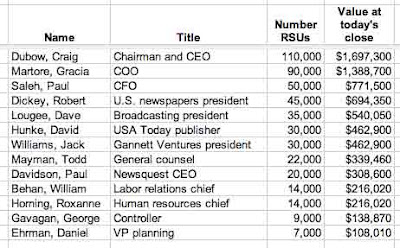 Email ThisBlogThis!Share to TwitterShare to FacebookShare to Pinterest
Tags: Board of directors, Executive Pay, Executive Suite, SEC documents, Stock options, This Just In