USAT | In new reorg details, 35 editorial jobs cut; but what's up with advertising, other departments?

The approximately three dozen editorial jobs axed leave another 100 positions unaccounted for paper-wide, assuming USA Today remains on target to reduce overall employment by about 130 -- the estimate Publisher Dave Hunke gave in late August, when he first outlined the paper's long-awaited reorganization. USAT has a total workforce of about 1,500. 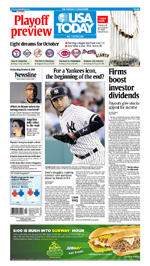 I remain especially interested in what's happening in the advertising department, since ad revenue losses appear to be the crux of USAT's financial woes. At current rates, USAT is on schedule to have lost as much as half its ad revenue base -- up to $150 million -- in the past three years. That rate is about the same as Gannett's overall publishing ad revenue losses since 2007.

But USAT's footprint, bigger than any other GCI paper save perhaps The Arizona Republic, magnifies the dollar losses enough to take a big bite out of GCI's total annual revenue. The still-unfolding reorganization almost certainly fails if it doesn't boost ad sales.

Yesterday, in a carefully worded memo to newsroom staff, senior editors suggested that much of the new staffing structure will be in place by Oct. 18, or soon after. That's when editors will make final picks of workers for still-open positions on a new investigative unit and in other areas, the memo says.

"Editors and reporters were demoted, re-assigned, transferred in an ad hoc fashion. In most cases, senior editors (DMEs) had jobs protected and were essentially assigned to oversee assignment editors doing the same tasks. Other AEs were told early in the day that they had autonomy over their teams, only to be told later in the day that they were no longer autonomous, but 'teathered' to former DMEs and senior assignment editors. . . .

"The cuts? It doesn't look like any editors will actually be out of a job -- at least in Money, Life or News. At least three to four reporters are out of work. And at least two office secretaries will be, too. Of course, they can 'reapply' for jobs, but they aren't qualified for the handful of jobs that were posted in the wake of this sham.

"We waited months for THIS mess? It was handled in the most amateurish way possible. Shameful."

All: The newsroom reorganization moves into its next phase starting today. Here's what's happening:

Chet and Susan are meeting with the "team leaders" who will oversee the teams on the content as well as the  distribution side. In Sports, Monte Lorell will be doing the same.

The team leaders will reach out to everyone who will be joining their teams in the new structure. In several cases, the teams are similar to what we have now – in other cases, they represent a combination of News, Money and Life beats. On the distribution side, there are new teams dedicated to the website, print and emerging platforms.

In some cases, the team members have not been decided. For example, we're forming a new Investigative unit on the Content side and we're looking for four reporters to join that team; on the Distribution side, we're looking for a new Homefront Editor and a new Social Media Editor for Mobile/Apps.

To see which positions are available, go to this website later this afternoon (when it will be activated) and follow the instructions: http://XXXXX. You may apply for up to two positions before Friday at 4PM. Interviews will be conducted next week and selected candidates will be notified by the beginning of the following week.

We appreciate your patience and your professionalism as we continue to work through this process. We will be phasing into the new structure over the next few weeks.

USAT staffers: How are other departments outside editorial being reshaped? Please post your replies in the comments section, below. To e-mail confidentially, write jimhopkins[at]gmail[dot-com]; see Tipsters Anonymous Policy in the rail, upper right.