Weekday circulation at the Detroit Free Press plunged 9%, to 245,326, during the six months ended Sept. 30 from the same period a year before, new ABC figures out today show. That's far worse than the average 5% decline for all dailies. Sunday, the most advertising-rich day of the week, was no better: The Freep's sales tumbled 11%, to 494,013, vs. an average 6.5%, according to the ABC. 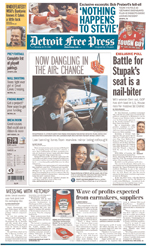 As expected, USA Today's circulation fell in the low single digits: down 3.7%, to 1,830,594 copies, the report shows. GCI Chief Operating Officer Gracia Martore had predicted the decline would be in that range during the third-quarter earnings conference call.

[Updated at 2:46 p.m. ET: Digging deeper into the numbers, however, Advertising Age notes in a new story: "At USA Today, you also have to decide what to make of the distinction between circulation paid for by individuals and circulation distributed free to airline passengers, say, or hotel guests. USA Today's individually paid circulation declined 9.3% to 692,901."]

At one of USAT's chief rivals, The Wall Street Journal, sales grew 1.8%, to 2,061,142. The WSJ and the Dallas Morning News were the only two of the top 25 papers to show growth. The WSJ has been adding more general news -- including sports, politics and lifestyle -- since Rupert Murdoch's News Corp. bought the paper in December 2007.

Why does the WSJ continue to pull ahead of USAT and the NYT? Please post your replies in the comments section, below. To e-mail confidentially, write jimhopkins[at]gmail[dot-com]; see Tipsters Anonymous Policy in the rail, upper right.