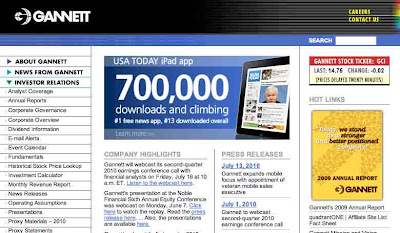 [USA Today iPad app promotion, seen on Corporate's homepage]
Gannett is expected to report higher second-quarter profits on lower revenue when it releases its latest quarterly results Friday morning. That would mean cost-cutting has once more saved Corporate's bacon. The report is due before stock markets open at 9:30 a.m. ET. It will be posted on Corporate's website, in the investor relations section.

CEO Craig Dubow, President Gracia Martore and other top executives will then host a teleconference with Wall Street stock analysts at 10 a.m. to discuss the report, and answer their questions. That call is open to the public, although in listen-only mode. Details, here.

Gannett's stock traded recently for $14.68, down 9 cents, or less than 1%. Shares are trading three times higher than a year ago vs. a far smaller 18% gain in the S&P 500 index, a broader measure of overall stock market activity. Still, GCI is down from a 52-week high of $19.69, according to Google Finance.

Stock analysts on average expect the company to report earnings of 53 cents a share, up 15% from 46 cents a year ago, according to Yahoo Finance. Revenue is expected to be $1.39 billion, down 1.6% from $1.41 billion a year ago, Yahoo says, when the economy was still in the depths of the Great Recession.

Honolulu, and that dead cat
Watch for any details about proceeds from the sale of The Honolulu Advertiser, completed in early May. Dubow & Co. could also announce a new chief digital officer to replace Chris Saridakis, who left the company April 30. As well, there's still the hiring of a permanent chief financial officer; Martore has held that responsibility since being promoted to president and chief operating officer Feb. 1.

Finally, Corporate could discuss the newly planned newspaper production hubs, as well as an update on USA Today's iPad app.

Corporate 'comfortable'
In early June, Martore (left) told analysts in a statement: "We expect the percentage increase in television advertising revenues in the second quarter to be in the low twenties and digital revenues to be up in the mid-single digits. In publishing, we continue to see improving trends and the percentage decrease in revenues is anticipated to be in the low-to-mid single digits." Regarding the company's earnings per share for the second quarter, Martore noted that "most of the analysts' earnings per share estimates are between 47 cents and 58 cents and the company is comfortable that earnings per share from continuing operations, excluding certain tax items, will be toward the high end of that range."