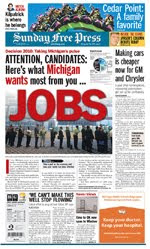 The new "premium home-delivery" service will be handled by independent carriers in limited locations in metro Detroit and will be expanded over time, Freep Editor Paul Anger said in a note to readers in this morning's edition. Anger did not say how much the service would cost.

In the new program, the Freep and MediaNews Group's Detroit News will sell Monday, Tuesday, Wednesday and Saturday newspapers to independent carriers, who will be able to set the price, time of delivery and other terms of service directly with readers, Anger said. The service's availability will depend on whether an area has an independent carrier in place.

Why? Postal threat, reader demand
Looking for ways to economize in Detroit's crumbling economy, both papers ended home delivery in March 2009 on all but three advertising-rich days: Thursday, Friday and Sunday. The Freep and the News continued printing scaled-back editions the other four days, which were sold only at newsstands and other retail locations. The papers also launched new digital editions. The cutback received widespread attention in the newspaper industry, where some observers said it could prompt other publishers to take similar steps.

Today, Anger cited two factors for the turnaround. The U.S. Postal Service is considering ending Saturday mail delivery nationwide. In Detroit, that would effect about 4,500 subscribers who pay a premium rate to get same-day delivery of Saturday's paper. Adding carrier delivery would continue service for many of those subscribers. The "most important" factor, according Anger: "We want to respond to all of our customers who have told us they want seven-day home delivery -- and value it enough to pay for it."

'I knew something was screwy'
It's unclear how long the Detroit Media Partnership has been considering the move; Anger's note did not provide details. The Gannett-controlled DMP is the joint operating agency that handles circulation, advertising sales and other business functions for the two papers; the dailies's two newsrooms are separate, competitive departments that produce editorial content for the Freep and the News.

The delivery move didn't surprise Anonymous@2:17 p.m., who first reported the move to Gannett Blog today: "I knew something was screwy when the News and Free Press started running their papers closer to 30 pages than the 24-25 we'd come to expect. Of course, the Detroit News is still usually reporting more 'news' on a daily basis -- ironic, since it's a MediaNews publication."

Indeed, the News reported the delivery shift on Friday, albeit in a one-paragraph item in a briefs package.