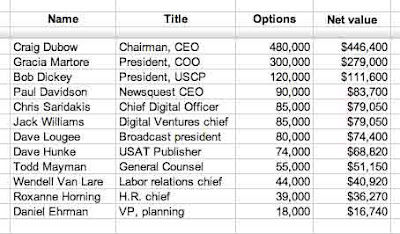 [Paper profits executives earned in less than a week]
A slew of stock options showered on a dozen top executives last week are already worth hundreds of thousands of dollars, based on today's closing price. Gannett's stock closed at $15.93 a share moments ago, as overall newspaper stocks surged amid rumors -- later denied -- that the New York Times Co. was a takeover target.

The options awarded last week by the board of directors allow the executives to buy Gannett shares from the company for $15 a share -- the "strike price" -- no matter how high the market price goes. They may buy and then sell the shares, called "exercising" them, in four equal annual installments starting Feb. 24, 2011, newly disclosed company documents show.

The 93-cent difference between this afternoon's closing price and the $15 strike price means, for example, that CEO Craig Dubow's 480,000 options have now jumped in value to a net $446,400 -- in less than a week. See the chart, above, for paper value increases for all 12 executives.