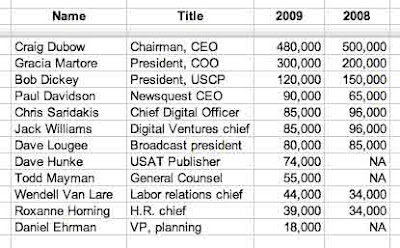 [Table shows new options revealed today vs. those in 2008]
Gannett just disclosed a boatload of new stock options for a dozen of the company's top executives -- awards that offer a glimpse at how big (or small) their 2009 bonuses will look when final details are released next month.

New President and Chief Operating Officer Gracia Martore (left) got 300,000 options -- 50% more than a year ago -- for work as chief financial officer when her cost-cutting drive contributed to more than 6,000 layoffs and other job cuts, according to newly filed documents.

The awards were revealed this afternoon in a series of regulatory documents filed with the U.S. Securities and Exchange Commission. The awards give the 12 named executives the right to buy Gannett stock from the company for $15 a share -- known as the strike price -- no matter how high market prices rise. The options become their property, or vest, in four equal annual installments starting Feb. 24, 2011, the documents show. They expire Feb. 23, 2018. The awards were made Wednesday when the board of directors concluded a regularly scheduled two-day meeting.

Only part of total pay
Stock options are a big part of the annual compensation paid to executives in Gannett and across Corporate America. But they're only part of their annual pay. Last year, for example, Dubow got an $875,000 cash bonus on top of his nearly $1.2 million salary. His total pay, including the estimated future value of stock options: $3.1 million, according to the annual proxy report to shareholders. (2008 pay for the five top executives.)

Details about the executives' total compensation for 2009 will be revealed next month, when the next shareholders proxy report is filed with the SEC. Still, the options announced today offer a glimpse of what they might have gotten in bonuses, pay and other benefits.

Newsquest's Davidson wins, too
By that measure, Martore appears to have gotten a big boost in overall 2009 pay. Dubow, on the other hand, appears to have been given about the same as he got for 2008.

The options disclosed today are already valuable on paper. Gannett's stock closed at $15.15 a share this afternoon. In Martore's case, for example, her 300,000 shares are worth $45,000 on paper, based on the 15-cent difference between the strike price and today's closing price. Plus, Martore's year had already started well: Three weeks ago, Gannett gave her a $250,000 raise in base pay, to $950,000 a year, as the new president and COO.

What's more, these options could be worth far more a year from now, when they begin vesting. The hundreds of thousands of options awarded executives last year were worthless by the time they were disclosed. Now, a year later, they're worth millions of dollars.

Did you get a pay raise or bonus last year? Please post your replies in the comments section, below. To e-mail confidentially, write jimhopkins[at]gmail[dot-com]; see Tipsters Anonymous Policy in the rail, upper right.
at 7:41 PM