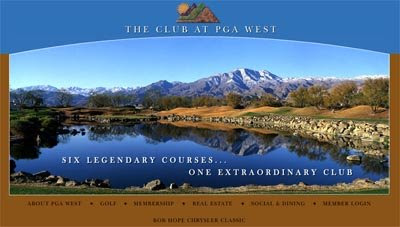 A top Gannett executive is competing as an amateur in this week's Bob Hope Chrysler Classic, held at golf courses including Palmer Private at PGA West, above, near ritzy Palm Springs, Calif. Amateurs pay up to $25,000 to play the event with a PGA professional.

Gannett has owned the afternoon Citizen since 1977. It is the weaker paper in a joint operating agreement with Lee Enterprises. The two split profits 50-50, so the Citizen is worth as much dead as alive -- maybe more, in the likely event GCI sacks the 80 or so newsroom employees. "We deeply regret having to take this step," Dickey said.

It had already been a tough week. Amid rumors of big budget cuts, and a looming earnings report, Gannett had earlier ordered about 35,000 U.S. employees to take one-week, unpaid furloughs this winter. "That includes me, your publisher, everyone,'' Dickey told workers in a memo. "We all will be sharing the financial hardship."

I will now tell you how one of Gannett's highest-paid executives -- and one of its most enthusiastic golfers -- is sharing that hardship.

Dickey is in Palm Springs, the Southern California winter resort where the company is spending a bundle this week on one of pro golf's biggest corporate schmooze-fests: the Bob Hope Chrysler Classic pro-am tournament, starting tomorrow. With much of the nation shivering, this desert oasis made famous by Hollywood royalty is looking forward to mid-70s temperatures today.

In fact, Dickey is competing in the event itself, as an amateur -- something he's done for years. Amateurs pay one of two entry fees, $12,000 or $25,000, to play with a PGA professional and two other amateurs, according to Dawn Suggs, the event's administration director. The higher fee pays for a "goody bag" of gifts. Local charities benefit. All the contestants are men.

Meet your pro: Bubba
Needless to say, amateurs paying these big bucks pray for a brand-name pro in the random drawing, perfect for name-dropping back home at the clubhouse. Dickey's team is to start at 10:36 a.m. Wednesday, at the Palmer Private course at PGA West -- a planned golf community 23 miles southeast of Palm Springs, in La Quinta. Dickey's pro the first day is Bubba Watson, 30 (above), a native of Bagdad, Fla.

Gannett's Hope Classic gambit could be the world's best investment -- if it boosts advertising sales. But the sybaritic spending, less than a week after furloughs and the Citizen threat, once more underscores the growing divide between the haves and have-nots, as Gannett Tower executives lay off thousands in one of the worst economies since the Great Depression.

I do not know Gannett's policy on paying tournament entry fees. The company last year stopped paying "club membership fees," the most recent shareholders proxy report says. But that appears to apply just to membership expenses.

I asked company spokeswoman Tara Connell whether Gannett paid Dickey's entry fee. I also asked whether he is taking this week as his furlough; whether he used the corporate jet for his travel; how much Gannett budgeted for the Hope Classic, and which executives are attending during the week. Finally, I also asked for the name of the individual who authorized any tournament spending. I left messages for Dickey and for Desert Sun Publisher Richard Ramhoff, too. (Updated: Connell has responded.)

There's more: Hotels, car rentals, restaurant and bar tabs would add to Gannett's bill for any client entertainment. There are fancy parties from one end of the Coachella Valley to the next. Plus, valley merchants are only too happy to oblige: "Prepare to be pampered by dedicated attendants, raptured by feelings of escape and transformation,'' says the Riviera Resort and Spa in Palm Springs, where one-bedroom suites run as high as $1,380 per night. (The 50-year-old Riviera reopened in October after a $70 million renovation. In its heyday, the 24-acre resort says, it was a playground for the Rat Pack's Frank Sinatra, Sammy Davis Jr., and Dean Martin).

Dickey knows this area well. He was publisher of the Desert Sun in the early 1990s, after joining Gannett in 1989 at the Reno Gazette-Journal. He has been president of Gannett's biggest and most troubled unit, the newspaper division, for nearly a year. Dickey succeeded Sue Clark-Johnson, who was paid $3 million in 2007, including a $480,000 bonus, the company's most recent proxy report to stockholders shows. Gannett will disclose Dickey's annual compensation in the next proxy report, this spring.

Rancho Mirage charity
Hosted by five-time winner Arnold Palmer (left), this is the 50th Hope Classic. (Bob Hope himself died in 2003.) The tournament is based in nearby La Quinta, one of the jewels on a necklace of exclusive communities southeast of Palm Springs, in the surrounding Coachella Valley. One of the better known is Rancho Mirage, home to Eisenhower Medical Center, and the Betty Ford Center for drug addiction.

Dickey is on one of 128 teams comprising a PGA pro and three amateurs, often seen in the event's signature powder-blue sweaters. He'll play four consecutive days, starting Wednesday. The tournament ends Sunday, when the pros compete for a seven-figure check, a 2009 Chrysler 300C automobile, and crystal trophy. Players got assigned to teams at a drawing Friday night at the Renaissance Esmerelda Resort and Spa in nearby Indian Wells.

The tournament is one of the valley's biggest annual social and charity events. Friday, organizers distributed $1.8 million to Eisenhower hospital and 37 other local charities. Sunday evening, there was a formal ball at the Esmeralda. (The spa there charges $219 for a 50-minute massage in a private room "adorned with rose petals.") 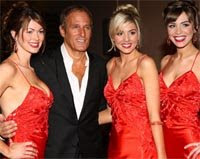