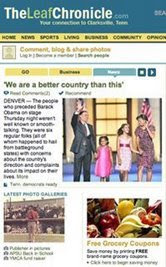 Gene Washer's retirement today as publisher of The Leaf-Chronicle has readers here wondering whether Gannett may use his departure as an opportunity to do away with the top job at the daily in Clarksville, Tenn. Washer, 68, leaves after 45 years at the newspaper -- 13 under GCI ownership. A replacement for Washer "will be named soon," the paper says in a very (!) long story, quoting Ellen Leifeld, publisher of The Tennessean in Nashville, and vice president of Gannett's South Newspaper Group, which includes the Clarksville daily.

But with GCI cutting costs by asking publishers to oversee multiple papers, Gannett Blog readers are speculating on this open-comments post about what's next in Clarksville:
Gannett's Tennessee papers
[Image: a recent screenshot from the Leaf-Chronicle's homepage; circulation data, 2007 Annual Report to shareholders]
at 7:06 AM