Giving peace a chance, is it time for detente?

Regarding whether we should expect Gannett's official spokeswoman to be more candid, a reader offers an intriguing suggestion: "I agree that you should give Tara Connell a break. She was a terrific reporter, a fiercely focused editor and she has navigated the new world of corporate-speak with more integrity than many who hold such jobs. No, she doesn't volunteer much, but her very minimalist approach -- even before all these layoff woes -- has kept her from missteps, dissembling or deception. The truth of the matter is she said very little before this blog; it would be unusual to expect her to be verbose or volunteering now. 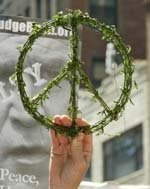 "Should she, though, answer your questions? I think the answer ultimately should be yes, because this blog, as mean-spirited as it is at times, is a full-blown news entity now. It's a two-way street, though. If the blog stops using her as a punching bag, and respects the position she is in, it could very well be useful for the company, through Connell, to occasionally communicate here.

"Right now, though, the blog is a mob scene. Understandable given what's going on. And Gannett itself -- Tara, too -- bear part of that blame for the unbelievably poor manner with which this was all communicated. This isn't five years ago, where Romenesko was the only game in town and maybe he'd publish a memo or two. This blog has gone Gannett-viral, and it is a new part of the company and the employee mindthink. With that, I believe, comes more responsibility on all sides to make it work for everyone.

"It would be less fun to drop the poking of Tara, but maybe a lowering of rhetoric -- given that people are losing their jobs -- might be good for all sides. There are a lot of inept people in all this --- bad managers, scared-silly employees, hangers-on and rubberneckers -- but most everyone involved, yes, publishers, too, are trying to get through this. There are a lot of enemies. Tara isn't one of them."

Confidential to Everyone: I have nothing personally against Tara Connell. She was responsive until around the time of the annual shareholders meeting, April 30.

But since then, Connell has replied to my e-mails on only a few occasions, and our relationship has grown more contentious. Meanwhile, Gannett Blog's readership continues climbing. This site likely has more readers than any other GCI employee publication (see chart, above, of last 30 days' traffic). It's now the virtual watercooler for a significant share of the 46,100 employees. Those readers aren't going away. I don't think Connell's going away. And I'm not going away. Given that, perhaps it's time for a truce?
Please post your replies in the comments section, below. To e-mail confidentially, write gannettblog[at]gmail[dot-com]; see Tipsters Anonymous Policy in the green sidebar, upper right.

[Chart: Nearly 24,000 unique visitors read Gannett Blog over the past 30 days, Google Analytics said today. About 20% were new readers, drawn especially by news of 600 newspaper layoffs last week]
at 8:47 AM

Email ThisBlogThis!Share to TwitterShare to FacebookShare to Pinterest
Tags: Letters to the Editor, Memos