It takes a village (of CEOs) to lead a company astray 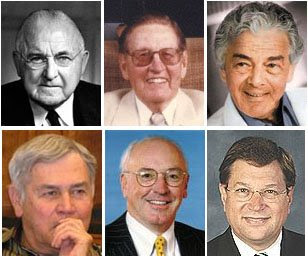 As Gannett edges closer to oblivion, it's tempting to heap all the blame on Craig Dubow, CEO since July 2005. But he had five predecessors, starting with Frank Gannett himself, who co-founded the company in 1906.

Two former CEOs stand out in my mind, because they ran Gannett during a time when the Internet rose as the company's biggest threat. John Curley was CEO from 1986 to 2000; the Web emerged as a viable commercial entity about 1995, with the launch of Netscape. Doug McCorkindale, CEO from 2000 to 2005, might have pushed for a massive investment in R&D, leveraging all the cheap technology talent available after the 2001 tech bust. Yet, we saw none of that.

Was Dubow simply the poor sucker left standing when the music stopped? Post your reply in the comments section, below. To e-mail confidentially, use this link from a non-work computer; see Tipsters Anonymous Policy in the green sidebar, upper right.