My life, on Internet time 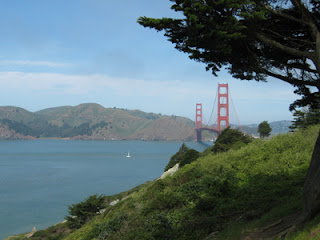 [March 2007: The Golden Gate Bridge, from the Presidio]

I started Gannett Blog anonymously here in San Francisco with plans to launch it in a bigger way after I left USA Today. (My name and photograph didn't appear on the blog until today.) Two months ago, I wrote for maybe eight readers -- on a good day. Then breaking news, and Jim Romenesko, suddenly showed up.

On Nov. 8, Gannett's biggest shareholder, money manager Brandes Investment Partners, disclosed in a U.S. Securities and Exchange Commission filing that it had nearly doubled its stake in the company. I posted my quick take that evening. Reuters moved a story of its own. Then Romenesko linked to me, and my traffic surged. Ahead of schedule, I was off and running. Now, two months later, more than 1,000 Gannett employees visit me two or more times each week. I've appreciated your willingness to share information with me so far, sometimes at a risk to your jobs. And I'm sorry it's taken until now to introduce myself.


Write, if you get a chance, through this link for e-mail. I'm gannettblog on Google Talk (which I prefer) and on AIM. You can visit me on my YouTube channel. I'm on Flickr. And Facebook, under my own name.

Don't faint, USA Today staffers!You won't find any dirt here on office politics, personalities or any of the other interesting stuff I've run across since starting at USA Today in 2000. In fact, everything I posted on the 43 USA Today buyouts was based on published reports or tips from Gannett Blog readers -- even though I was one of the 43! You won't find any inside dirt about the paper after today, either. This isn't that kind of blog.

So, what kind of blog is it?
For a quick overview, read About Gannett Blog. One of my most popular features is Executive Suite. For my take on Gannett's well-paid top brass and their strategic plan, check out the band plays on. Gannett stock talk? Oy, vey! I've done casual surveys on reader demographics. Don't miss snarky Commentz Korner. I've noted cool and not-so-cool stuff in Hot Off the Press. And I showcase photography in Cutlines Only. I got teary-eyed writing about USA Today buyouts in a note that struck a cord: It's my most-read post.

About Me
I'm nearly 51. I grew up in Providence, R.I., where I graduated from Brown University. I love newspapers, and so does my family. My parents met as reporters at the Hartford Courant in 1954. An uncle was a newspaper reporter. And my sister works in the business today.

[September 1985: Pine Bluff, Ark. I was 28 years old.]
I started my career 22 years ago as an apprentice reporter at the Pine Bluff Commercial -- at the time, a wonderful, family owned Pulitzer Prize-winning paper in a small Southeast Arkansas city. Two years later, I joined Gannett at the late, great Arkansas Gazette in Little Rock, a paper I wrote about here.

My Arkansas Gazette experience in its final, sad months is one of the reasons I launched this blog. It was fall 1991, five years after Gannett had stumbled into Little Rock. The Gazette was by then losing $30 million or so a year in a bitter war with its cross-town rival, the Arkansas Democrat. The U.S. economy was sliding into recession. Rumors flew that Gannett was planning to sell us to the competition, or dump us into a joint-operating agreement. More than 700 employee families were desperate for information.

[October 1987: Little Rock. I was 30 years old.]
I had a personal crisis unfolding as well. My domestic partner, Danny Bryant, had just been diagnosed with AIDS. (I was fortunate to remain HIV-negative.) I was our only means of support, so knowing my future at the Gazette was vital.

In the end, Gannett closed the Arkansas Gazette -- selling its name, presses and other assets to the competition. I managed to find work at The Idaho Statesman in Boise, owned by Gannett at the time. Danny (left) died there within a year. He was 37.

In 1996, I transferred to The Courier-Journal in Louisville, where I worked until early 2000 as an investigative reporter. I next took a business reporting job at USA Today in San Francisco. I left that job yesterday, ending my mostly happy 20 years with Gannett.

Drop me a line, courtesy of the First Amendment
Today, much of Gannett is experiencing the uncertainty we saw in Arkansas in the summer of 1991. But now, technology empowers the company's nearly 50,000 employees to communicate in ways not possible 16 years ago. Start more blogs: I'd like to build a companywide network! Use this link to share ideas, tips, snarky comments. See my Tipsters Anonymous Policy in the sidebar, upper right. Or leave a note in the comments section, below. It's crowdsourcing time!

Jim Hopkins
San Francisco
Jan. 11, 2008
[Images: I took that Golden Gate Bridge photo while biking across the Bay to Marin County; that was Danny during a visit to Boston's Isabella Stewart Gardner Museum around 1989]
at 3:00 AM