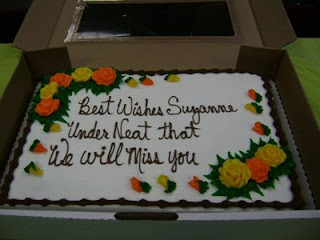 [Sheet cake: infamous Wal-Mart version]
Let's get real: We don't love all our departing co-workers equally. For example, some of us think we're God's gift to Gannett; others hold a different view. This mismatch only gets worse in the case of bigger and more influential colleagues: i.e., the boss. "Why exactly are we throwing a party for this guy?" a reader wrote recently in a comment, about a suddenly departing USA Today editor. "If he has a small posse of peeps he's close to, they can go have drinks or whatever."

Yet, as thousands of colleagues leave, we go through the motions -- even when the honoree isn't so, well, honored. An e-mail flashes across department computer screens: "Cake in five minutes in conference room to say goodbye to __________ ,'' the note says -- adding, a bit hopefully: "I'm sure we all want a nice send-off."

Next, some poor wretch assigned to the task rolls out the dreaded carrot cake and napkins (plastic utensils budget was cut). Assistant managers look up, then drag themselves to the center of the room. Others s-l-o-w-l-y join in, forming rag-tag circle. Honoree (example: inset, left) stands gamely in the middle. Resigned glances all around. A moment of praise that seems to take until next Wednesday to deliver. An awkward pause, followed by a flutter of faint clapping. Cake in hand, race back to desk to meet a deadline.

(Confidential to Nashville: I've just described The Courier-Journal newsroom's 1997 going-away party for top editor Mark Silverman. Contrary to legend, however, we didn't dance a conga line through the room when his transfer was announced. Silverman's exit came only a year after Corporate sent him to Louisville to bring the anti-Gannett faction to heel. We know how well that worked!)