History | Highlights of the Dubow administration 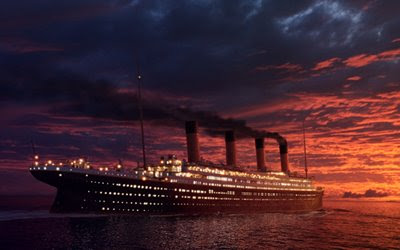 [The band plays on: Shares have plunged since Dubow became CEO]
2005

May 25: Waking briefly from a deep slumber, the board of directors discovers the Internets, and concludes that Gannett is going to hell in a hand basket. Reportedly turned down by its first two outside candidates, the board settles on No. 3: Dubow (left), head of the TV division. Gannett stock closes: $75.31 a share.

2006
Nov. 2: Dubow reveals a major part of his strategic plan to save the company: Reorganize GCI's newspaper newsrooms around the newly created Information Center model. "This looks an awful lot like rearranging the deck chairs on the Titanic,'' writes a certain blogger, who's privately tracking Gannett. Stock closes: $58.25.

Dec. 29: In one of the first labor-management skirmishes over the Information Center idea, top executives at The Indianapolis Star (left) back down over demands that newsroom employees write advertorials.

2007
March 16: Shares tumble more than 4%, to $55.76, as GCI warns profits will sink. A Morgan Stanley stock analyst says: "Revenues look to be far from reaching some sort of a trough, and until we see some indication of stabilization, we would steer clear from owning the shares."

July 24: The board approves a 29% hike in the quarterly dividend, the single-biggest increase since 1995. Summering in the Hamptons, Wall Street is unimpressed. Meanwhile, the bubbling U.S. mortgage crisis grows worse and -- unknown to most employees -- begins to emerge as the biggest threat to Gannett's future.

Sept. 11: In an alarming memo, Dubow warns that progress is coming too slowly, and hints at a big downsizing: "This is the hard part. This is where transformation gets really difficult. I want to begin talking with you more about this process and what it means. I can't take away all the pain and doubt, but I can help lead you through it." Also, Gannett Blog emerges from stealth mode, appearing in public for the first time.

Oct. 24: Former NBC News president Neal Shapiro named to the board of directors.

Dec. 7: In a dramatic downsizing, USA Today buys out 43 newsroom employees, nearly 9% of all -- losing some of the No. 1 circulation newspaper's high-profile staffers. (Those outmoded digital dinosaurs included a guy with an idea for blog. Oops!)

Jan. 10: One of the company's most powerful executives, newspaper division chief Sue Clark-Johnson, announces plans to retire; she's later replaced by Phoenix GCI executive Bob Dickey (left). The next day, former USA Today reporter and editor Jim Hopkins reveals he has been the anonymous editor of the nascent Gannett Blog.

Feb. 15: The Poopgate scandal grabs headlines, as Courier-Post employees in Cherry Hill, N.J., threaten a U.S. Labor Department complaint if they don't get paid for overtime they have worked.

March 13: Gannett discloses that Dubow was paid $7.5 million in 2007, including a $1.75 million bonus. Employees are outraged: "Gannett stock plummeted almost $50 a share inside of a year and he gets a $1.75 million bonus? And reporters and editors are making due with less staff, less resources -- I'm beyond shocked,'' one says. Stock closes: $29.97.

March 26: Public documents reveal the company's charitable arm, the Gannett Foundation, has quietly allowed Dubow and other top executives to steer nearly $424,000 to their pet charities -- far from communities where the company does business.

May 29: Squeezing employees more, Gannett lays off 55 workers at the Asbury Park Press and three other N.J. newspapers.

June 9: The financial picture worsens: GCI writes off nearly $3 billion of its assets.

Aug. 18: Gannett starts issuing pink slips. Enraged employees complain the layoffs are taking too long: "The way that management carried this out felt very much like a hit and run."

Sept. 9: In a major reorganization of its troubled newspaper division, Gannett discloses it has laid off about 100 directors -- heads of human resources, production, advertising and other high-profile jobs.

Oct. 28: Reeling from a second consecutive quarter of big revenue losses, Gannett announces plans to lay off 10% of its newspaper employees -- up to 3,000 workers -- by early December. Stock closes: $10.22.

Nov. 28: Internal Gannett documents show every company newspaper but Detroit's was profitable as of the third quarter of 2007. Highest profit margin: the Green Bay Press-Gazette, at nearly 43%.

Please post your replies in the comments section, below. To e-mail confidentially, write gannettblog[at]gmail[dot-com]; see Tipsters Anonymous Policy in the green sidebar, upper right.
at 4:30 PM