Big Al | In death, he really did have it his way

The plan wasn't nearly as over-the-top as "Operation Serenade," the code name President Ronald Reagan's advance men used when they orchestrated his seven-day state funeral in 2004.

Still, Al Neuharth left nothing to chance for his own sendoff last month. Well before he died at 89 on April 19, following a fall at his seaside estate in Cocoa Beach, Fla., the retired Gannett chairman and CEO drafted the blueprint for his last hurrah, according to public documents released today.

First and foremost, there was to be no traditional funeral. "Instead," he directed in his Last Will and Testament, "I request three memorial celebrations of my life." 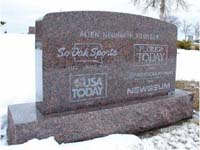 One was to be in Brevard County, Fla., preferably at Florida Today facilities. A second, at the headquarters of the Freedom Forum foundation and Newseum he launched in Washington. And the third at the University of South Dakota south of tiny Eureka, and the family plot where he asked to be buried under a headstone adorned with the logos of USA Today and other media companies he founded.

"Invitations, the program and all other aspects of the celebration shall be carried out as I have previously discussed in person and in writing," Neuharth said -- duties handed to associates including his long-time consigliere Charles "Peanut" Overby.

And true to his gold-plated philosophy that "first class costs only a few dollars more," Neuharth said the sky was the limit in how much those three celebrations could cost.

Those wishes are perhaps the most interesting details -- save one other -- in the 12-page will, a copy of which I obtained this morning from the Brevard County clerk under Florida's open-records law. The document is a testament to a life and career that made him one of the last modern-day media moguls -- and a man with an obsessive attention to detail.

Signed Dec. 30, 2009, the will doesn't reveal dollar amounts of any specific bequests from an estate almost surely valued in the multimillions of dollars, amassed during his 26 years as a jet-setting GCI executive, ending with his retirement in 1989.

Instead, all his assets were folded into the Allen H. Neuharth Revocable Living Trust when he signed his will. He named his daughter Jan Neuharth and his long-time friend Malcolm Kirschembaum, a Cocoa Beach attorney, as personal representatives to handle his estate.

Echoes of Sinatra
The service at Freedom Forum was held May 15 before 500 friends, family members and other guests. Musical accompaniment, also presumably at his request, included the Frank Sinatra classic My Way. That song selection was hardly surprising: He and his buddies were Gannett's version of the rat pack, with Neuharth dressed in sharkskin suits in the Sinatra role.

During his heyday as GCI's chief executive, USA Today reported in his obituary, Neuharth "maintained sprawling suites at the Waldorf Towers in New York City and the Capital Hilton in Washington, and he traveled on a corporate jet with its own shower."

A Newseum report called the May 15 event "a unique send-off that ranked with the memorial services of Ford Motor Co. founder Henry Ford II and Pulitzer Prize-winning humor columnist Art Buchwald, two celebrations that Neuharth admired and cited as 'full of felicity.'" (Indeed, Buchwald announced his own death in a New York Times video.)

Burial followed three days later at South Dakota's Eureka Cemetery, alongside his parents, brother and sister-in-law. (In fact, the will indicates he was cremated.)

In all, his final passage at the top was a long, long way from his very modest childhood. Born March 22, 1924, Neuharth grew up in a German-speaking household in rural Eureka and Alpena. When Neuharth was only 2, his father died, leaving his mother Christina to raise him and his older brother Walter by washing dishes and taking in laundry. Her story would reverberate across GCI decades later in Neuharth's management style.

A missing name
The one other interesting detail I noticed in the will forms a sad coda to his life. In identifying his family members, he lists his third wife, Rachel Fornes, and their six adopted children; two grandchildren; and his first wife, Loretta Neuharth, and their two adult children: Jan and Dan.

But conspicuously absent is any reference to Rosamunda Neuharth-Ozgo, almost certainly ending her long quest for Neuharth to publicly recognize her as his daughter from a year-long affair she says he had in the early 1960s.

In that matter, Neuharth seems to have had his way, too.

Related: from Princess Diana to Michael Jackson, other wills of the rich and famous.
at 2:49 PM