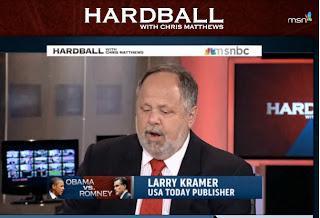 Publisher Larry Kramer spoke to TV pundit and long-time buddy Chris Matthews yesterday about the new USA Today. What do politicians think about the paper when they're trying to curry favor? "They love us," Kramer said. "We represent America to them."

USAT remains politically nonpartisan, Kramer says. That said, in his search for a more pronounced voice for the paper, editors will give reporters like Susan Page "more running room" to "tell the story their way." Here's the video.

Meanwhile, other than photos like these from Thursday night's launch party, Sports Media Group and top boss Tom Beusse don't seem to be getting much marketing rotation in the broader public arena.
at 8:49 AM