Blog birthday: How you take power from Corporate 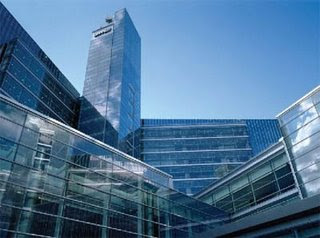 Corporate won't participate with Gannett Blog because it says I engage in "rumor mongering and sensationalism," as spokeswoman Tara Connell told Columbia Journalism Review in a recent story. Unfortunately, that shows Gannett hasn't learned much since former newspaper division president Gary Watson sneered at my concerns that GCI was too wed to print, after I questioned him during a 1995 meeting with his eventual successor, Sue Clark-Johnson.

Like blogger Paul Gillin, I suspect Connell is just following orders from the woman I've been told is her boss: Chief Financial Officer Gracia Martore -- Gannett's de facto CEO. I give former USA Today managing editor Connell more credit: She's not so dumb as to think the Internet and blogging are just fads that will fade away.

And yet: Connell is responsible for employee communications, which makes me wonder how she claims to do her job without addressing workers here. It's not like Corporate offers an alternative. Today, exactly a year after my blog went live with this post, the nation's No. 1 newspaper publisher still doesn't publish a Corporate blog of its own. Think about that: Even as Gannett orders its papers and TV stations to create more digital offerings, with fewer employees, Connell and News Department chief Phil Currie (inset) defiantly refuse to do the same.

As we say, not as we do
For example, look at today's edition of Currie's News Watch. Why isn't that weekly newsletter published as a webpage with instructional videos, commenting tools, and other interactive features? Why does Corporate think it's OK to adopt an attitude that reeks of, "do as we say, not as we do"? Please don't whine about having too much work already. You've never accepted that excuse from the field -- preferring instead to heap more work on employees, while ignoring questions about their being forced to work illegal, unpaid overtime.

Gannett workers hunger for more information. Tuesday, when Corporate disclosed a big newspaper division reorganization, employees raced here for more details. Traffic surged near record highs. Some of you came for my analysis of the 100 management layoffs.

But most of you came to learn from each other. I happily became a bit player here long ago: This blog's power has little to do with me -- and everything to do with you. That's exactly what I hoped for a year ago. As I told a fellow blogger recently, I started Gannett Blog so employees would have a safe place to share information about the company, without fear of reprisal from management, as they prepared themselves for a vastly changed industry.

[Image: today's Journal News in Westchester, Newseum. The paper lost most of its operating committee members in Tuesday's newspaper division reorganization]
at 12:02 PM