Charities tied to high-profile Wisconsin athletes and teams raise millions of dollars annually for dozens of causes, but IRS filings also reveal some report expenses improperly, use money inefficiently or fail to file reports at all. 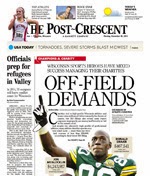 And despite the inherently high profile of professional athletes, many athlete charities operate on a very small scale — more than one-third had revenue of less than $50,000, according to their latest IRS filing.

Those are among the findings of an investigation published today by Gannett Wisconsin Media's investigative team. It examined 51 active or recently shuttered charities connected to Wisconsin athletes and professional teams, compiling a list based on IRS public records and an array of online resources. The team also assembled a searchable online database of related charities.

Charitable foundations have become a huge industry in recent decades, but the news media rarely play their watchdog role making sure abuses don't occur. To do so in Wisconsin is all the more challenging because of a fan culture that often favors teams like the Green Bay Packers over the public's right to know.

Got exemplary work to recommend? Please post your replies in the comments section, below. To e-mail confidentially, write jimhopkins[at]gmail[dot-com]; see Tipsters Anonymous Policy in the rail, upper right.