Lafayette, Ind. | This hometown's disadvantage: when Hoosiers basketball isn't local news, what is?

In late August, the top editor of the Journal & Courier in Lafayette, Ind., handed employees a set of talking points to deal with any readers angry about cuts the paper was making in news coverage. Howard Witt suggested emphasizing:

"Our aim is to give print readers more of the in-depth, community-focused news, features and sports content they consistently tell us they want and that no other news provider in this region can match."

Fast forward to Monday, when Witt memo'd staff that one of the paper's handful of photographers is leaving for the much larger Indianapolis Star -- and won't be replaced.

What's this mean for that promised additional local news at the 25,000-circulation daily? Witt didn't say, telling staff only this: "We’ll be adapting our shifts and expectations to account for the fact that we’ll be down a photographer."


But it gets worse
Less than two weeks ago, the paper laid off its star sportswriter, Jeff Washburn, who'd covered Indiana high school basketball for some 40 years -- earning him a spot in the Indiana Basketball Hall of Fame two years ago. The day he was canned, I'm told he was simply escorted out of the J&C building.
Let's just pause here for emphasis: H-e-l-l-o, Corporate? Local news? Indiana basketball? Did anyone back there even see 1986's Hoosiers? 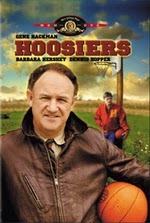 To his credit, Washburn told his apoplectic 3,800 Twitter followers that sacking him was not Witt's doing. "Decision was not a local one," he tweeted, ironically. "Very sad. Numb right now."

For sure, these lamebrain decisions are being made all across Gannett's newsrooms. In August alone, the company eliminated more than 400 jobs throughout the U.S. newspaper division, with more than a few held by journalists. They included the über-popular Joe Heller, editorial cartoonist at the Green Bay Press-Gazette for 28 years.

But it's particularly galling when we know CEO Gracia Martore will once more boast about the company's "hometown advantage" when she briefs Wall Street about the third-quarter results on Oct. 21. In Lafayette, Ind., readers would have a far different opinion.

Related: watch the trailer for Hoosiers, starring Gene Hackman.
at 12:02 AM