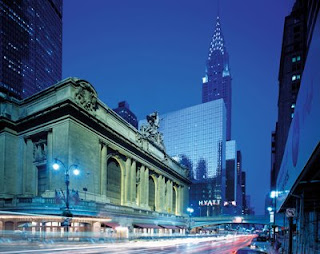 [Grand Hyatt hotel, seen in background, is likely venue for Gannett's big layoff announcement in two weeks. But will Corporate risk bad publicity by flying there aboard the company jet?]

Gannett is almost certain to send a delegation to a high-profile Wall Street media stock analysts meeting, scheduled to start two weeks from today at the glittering Grand Hyatt hotel in New York. CEO Craig Dubow (left) and other top executives will tell influential analysts there how much Gannett expects to save as a result of the mass layoff now underway across the company. The more savings Dubow can report, the more likely analysts will boost GCI's stock price.

Chief Financial Officer Gracia Martore alluded to this meeting during the third-quarter earnings conference call. But I didn't find details until today, when the sponsor -- Swiss investment bank UBS -- published a schedule for the event. (Gannett participated in last year's conference, which I live-blogged.)

The three-day Annual Global Media Conference is scheduled to start Dec. 8 -- five days after the Dec. 3 deadline by which Gannett hopes to have finished laying off up to 3,000 newspaper division employees.

By private jet -- or commercial coach?
Surely Corporate noticed what happened after the Big Three automakers flew their CEOs to Washington aboard private jets, seeking taxpayer bailouts last week. Didn't work out so well, did it? The same devastatingly bad press coverage awaits Corporate and other media kingpins traveling to New York by jet and limousine for the UBS event.

Indeed, I was told Dubow & Co. plan to visit The Indianapolis Star on Dec. 4 -- theoretically, the day after most of the layoffs there and elsewhere have been executed. (Have the painters started touching up the Star's lobby yet?)