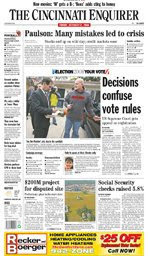 (Updated at 6:37 p.m. ET.) In an anonymous comment, a reader says CEO Craig Dubow spoke of more layoffs as soon as year's end during a meeting today with Louisville employees. I have not corroborated this on my own. The reader's comment: "He was cornered at the end of the meeting by a handsome young man about when the layoffs would occur and how large. He said that the numbers were still being worked on and that sites and the UK had to be visited, but that it would probably be before the end of the year. We didn't know if that is when the numbers would be known or when the actual layoffs would occur."

(Earlier.) Back in the days of the old "on-site" visits, the Idaho Statesman once published results of an inaugural Idaho Poll to impress then CEO John Curley and other potentates visiting from Corporate. (It was the pricey poll's first and only appearance.) Carpeting long in need of repair was fixed. The lobby was spruced up. As business news editor, I was told to make sure Gannett's stock listing was correct in that day's paper. You can imagine all the other headaches we faced in this "company's coming" drill.
Fast forward to today, when CEO Craig Dubow and newspaper division president Bob Dickey are reportedly visiting The Courier-Journal in Louisville, Ky., and then The Cincinnati Enquirer, 100 miles northeast in Ohio, for a series of meet-and-greets with employees. Readers here posted questions they'd like Dubow to answer, including: "Do you read the Gannett papers?" (I'd love to hear him answer that one!)

Louisville, Cincinnati: What can you report from your meetings? Please post your replies in the comments section, below. To e-mail confidentially, write gannettblog[at]gmail[dot-com]; see Tipsters Anonymous Policy in the green sidebar, upper right.

[Image: this morning's Enquirer, which Dubow and Dickey would be expected to read closely. The front page features the nation's current "talker'' of a story: Joe the Plumber of Holland, Ohio, now enjoying his 15 minutes of fame, 200 miles north of Cincinnati]
at 11:51 AM