USAT | A tale about dueling 'exclusive' interviews; who actually got the 'get': ABC, USAT -- or People?

Screenshots from my iPhone this morning tell conflicting stories about the exclusivity of interviews with Amanda Knox, the American whose murder conviction was overturned by an Italian court. She's now promoting a just-published book while she faces the possibility of retrial.

ABC News posted a text story at 8:54 last night based on what it called an "exclusive" interview with correspondent Diane Sawyer; the video version is scheduled to appear at 10 tonight: 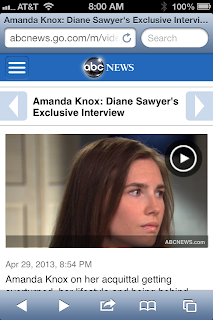 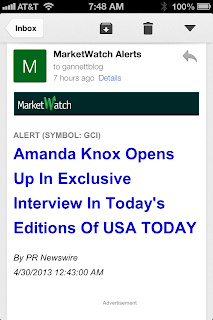 But in the story, the paper offers several qualifications in especially tortured language: "It was the first sit-down, face-to-face interview Knox had done with a reporter, followed by other interviews about her book with People magazine and ABC News' Diane Sawyer. An ABC special, Murder. Mystery. Amanda Knox Speaks, airs at 10 ET tonight." 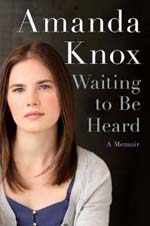 And in yet another qualification, USAT says in the press release (my emphasis added): "Page had the first sit down, face-to-face interview that Knox has ever done with a reporter. Knox's interview with USA Today fell just five days after an Italian court ruled Knox must face a re-trial. Despite the court's decision, Knox kept her interview."

Apparently, the first "ever" refers to the fact the interview was actually conducted on March 31 -- but held until today under a so-called embargo. Also, it was "sit down" and face-to-face."

In fact, People's story was posted online April 18 -- nearly two weeks before ABC's and USAT's. Way back then, the magazine said: "She's been free since 2011, but Amanda Knox -- who spent four years in Italian prison for murder -- still faces moments of crippling anxiety, she tells People Magazine exclusively."

But, wait; there's more!
ABC's text story last night notes (emphasis added): "Right after the ruling came down, Knox told ABC News, 'I was so convinced that it was finally going to be over, but it just means that it's all the more important that I say what happened and keep fighting for what's right.'"

The questions: Does the exclusive label even matter to readers and viewers? Or is this just a war over bragging rights that only P.R. departments care about?

Related: HarperCollins reportedly paid Knox $4 million for the book rights. The publisher is owned by News Corp., which also owns Fox News and The Wall Street Journal. News Corp., it seems, decided it didn't want to keep the exclusive interviews in house.
at 8:32 AM